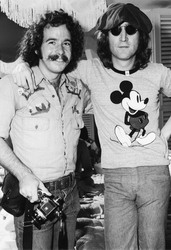 Slides of Over 30 Different
Artist Performing in Concerts

US Presidents-Politicians and
Kennedy Family Photos

Singer Island portfolio plus
other Nature Studies from
Kens travels

Ken's One Of A Kind

Ken Davidoff started working in his  fathers studio in 1966.  For over 50 years his
dad, Bob Davidoff,  was The Palm Beaches Renowned Society Photographer.  His Dad
passed away in 2004.  Davidoff Studios is currently the official photographers of Donald
Trump's Mar-A-lago Club in Palm Beach, Fl.  where he still shoots assignments for his mom
Babe Davidoff.  He spent his first 20 years in photography at his parents studio before
venturing out on his own,  starting his own studio.  Since 1985 Ken has also been a sports
memorabilia dealer,  incorporating his own photography in some of the pieces he has for
sale. Some of the people and historical events he has had the opportunity to photograph
includes :  The Launch of Apollo 11( the first moon landing},  The 1972 Democratic and
Republican conventions in Miami Fl,  The 1969 Palm Beach Rock Festival, Six United States
Presidents including : Jimmy Carter,  George Bush Sr,  Ronald Reagan,  Richard M. Nixon,
Lyndon Johnson,  and Gerald Ford.  His father Bob,  was John F. Kennedy's choice as
photographer  for the family in Palm Beach.  Ken has also photographed Royalty such as,
Princess Diana,  Prince Charles,  Her Majesty Queen Sirikit of Thailand,  Prince Phillip &
Queen Beatrice of the Netherlands, and King Hussein of Jordan.
Rock stars in front of Ken's lens include :  Elvis, John Lennon, Janis Joplin, Jimi Hendrix,
Led Zeppelin,  and The Rolling Stones at the 1969 Palm Beach rock festival {the day after
the album "Get Yer Ya Ya's Out" was recorded}.  Celebrities include George Burns and Bob
Hope to Jay Leno and Russell Simmons.  Baseball players such as Cal Ripken,  Sandy
Koufax, Bob Feller and Reggie Jackson and the list goes on.
Please feel free to visit all of the galleries we have presented, as you can see from
our opening message we have alot to share with you.

The Kennedy Family Album .
with over 200 Photographs
by Bob Davidoff and Sons

Collectable Photographs of
Historical Events Apollo 11 and 1972 Democratic and
Republican Convention,and
Presidents such as Ronald
Reagan,Richard Nixon,
famous Celebrities like
Bob Hope, Bette Davis,
and Jay Leno  have been
photographed by Ken